The Photon Band, also called the Photon Belt, or Manasic Ring, is an immense region of space, 760 billion mile wide. It is a toroidal, or ring shaped field of energy, giving out intense electromagnetic radiation. It is made up of Photons, which are defined as the smallest divisible unit of light energy.

When astronomers first discovered it, they thought it was an unusual nebula, a vast cloud of gas and dust and they called it the “Golden Nebula”.

The Photon Band encircles the Pleiades Star Cluster at a right angle to its orbital planes. Our solar system is the 8th star in the Pleiades star group, orbiting Alcyone, the central sun of the Pleiades. 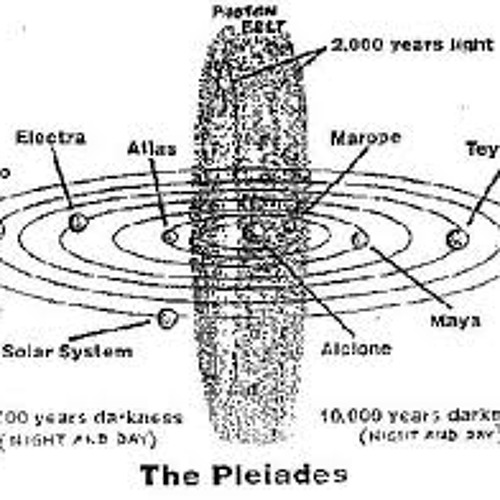 Our solar system completes this journey once in every 26 000 years. During that time, it is in the Photon Band twice, spending 2000 years in it each time. The 10 500 years out of the Photon Band is referred to as the “Galactic Night”.

Being in the Photon Band is a spiritual experience. The Photon energy transforms and transmutes, alters consciousness, giving opportunities for both spiritual and technological developments.

It was discovered in 1961 by means of satellite born instrumentation. In the early 1980’s there was a radio announcement that our solar system will collide with an electromagnetic cloud in the not too distant future.

Currently, Mainstream Science proclaims that this is only a New Age belief. Information on it is being suppressed. Astronomers who discussed the Photon Band lost their jobs, or have been denied access to equipment required to study it.

Yet, government scientists have secretly tracked the Photon Band for the past 50 years.

The intense Photon energies may cause a geological upheaval on the planet, like earthquakes. temporary darkness and even a pole shift.

How severe those events will be, depends on compatibility of the energies. The Photon particles vibrate at a high rate. If vibrations of our solar system are significantly lower, entering the electromagnetic cloud may result in an abrupt correction.

This process will also unfold on the individual level. If a person’s vibrational frequency is high, the Photon energies can be easily integrated and an instant positive shift, an elevation of consciousness will occur.

If there is an incongruity of frequencies, the integration will require some work. Most often, the Photon energy triggers the release of emotional blocks, bringing repressed emotions to the surface for processing.

In any case, the immersion of planet Earth into the Golden Nebula, the Photon Band triggers the Ascension Process.

Low vibratory energies of manipulation, deceipt and service to self can not sustain themselves in a sea of Photon partiçles. The bad guys will have no place to hide.

Early estimates placed our solar system’s entry into the Photon Belt in the mid 1990’s. The prediction did not come to pass. We are still not in it and there are a few possible reasons why.

It’s not easy to predict the exact timing of it, because Photon field oscillates, contracts and relaxes. In addition, 20-25 years is a long time as a human experience, but in universal time it is very short.

It is also possible that the earth wasn’t ready to receive these powerful energies and certain adjustments had to be made to avoid a great cataclysm.

However, at present, our solar system is finally ready to take this cosmic leap. 3 thoughts on “The “Golden Nebula”, the Photon Band”