Fluoride is highly toxic substance that has been added to water supply in the United States since the 1940’s.

It is an endocrine disruptor that affects the brain, bones, thyroid gland, pineal gland and blood sugar levels among other things.

The exact name of the chemical that is added to the water supply is Hydrofluosilicic Acid.

It is produced by collecting condensation of gases that are released in the process of converting phosphoric rock into fertilizer.

Quote from the Poly processing.com blog:

“Hydrofluorosilicic acid, or H2SiF6, is a challenging chemical because it has properties that pose danger and specific storage concerns. With its common use in water treatment, it’s important that you’re aware of the risks that storing this chemical improperly carries”

This stuff can eat through concrete.

It is added to 70% of the water supply in the United States, affecting 220 Million people.

The United States is the only developed country that fluoridates water, 98% of Western Europe rejected it. 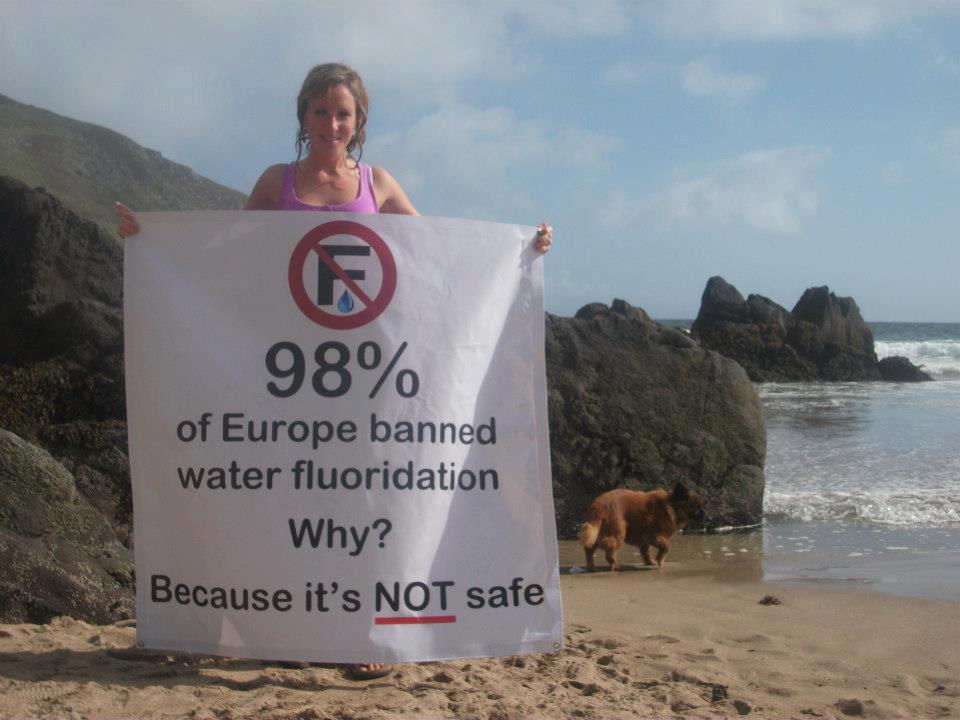 Americans drink more fluoridated water, the the rest of the world combined.

The reason we are told this chemical has been added to drinking water is to prevent cavities in teeth.

First I will address a few typical arguments that are usually brought up in favor of fluoridation.

Tooth decay has declined the same way in other countries, where fluoride was not added to the water supply and it was already a downward trend before fluoride was added, so it was not a contributing factor.

Fluoride does occur in nature at certain places, but that doesn’t mean it’s safe.

In some places, where it occurs naturally, like China and India, measures are taken to remove it from water.

Fluoride is not an essential mineral, it is not needed for any biological processes for the body.

In fact, fluoride has done damage to teeth.

40% of adolescents have dental fluorosis today (discoloring of tooth enamel due to excess fluoride exposure), that is a 400% increase since 1960.

When it comes to beverages, infants are most at risk for fluorosis, due to consumption of baby formula made with fluoridated water, this can be multiple times the recommended amount.

The powdered version of hydrofluosilicic acid is sodium fluoride this is what’s in toothpastes. There are even disclaimers printed on the toothpaste packages due to its toxicity.

In addition, many people use too much toothpaste. The recommended amount is only a pea size for adults, but due to the way it’s advertised, people are led to believe that toothpaste needs to cover the whole brush.

Why aren’t dentists against fluoride?

“Behind the scenes many dentists acknowledge this situation but the ADA (American Dental Association) maintains such a stranglehold on the profession that it is dangerous for them to become openly critical of the practice of fluoridation.”

In their training they are not even told where this chemical comes from.

Sodium fluoride is also the main ingredient in rat poison, sarin nerve gas and in Prozac. It causes the body to absorb more aluminum, which goes to the brain, causing Alzheimers.

It calcifies the pineal gland, tests have shown to lower IQ and can lead to bone cancer.

As mentioned, Fluoride is an endocrine disruptor.

The endocrine system is a collection of glands that excrete hormones. Hormones regulate many aspects of our physiology, like growth, development, metabolism, sensory perception, sleep and stress.

Fluoride also blocks the absorption of Magnesium, a very important mineral, that 80% of the population is deficient of.

I like to sum it up in four words:  – Fluoride is a Neurotoxin.

Which means nerve poison. Every single aspect of our biological function is controlled by the nervous system, via the brain, spinal cord and the peripheral nerves. For this reason, the accumulation of this toxin in the body has far reaching consequences.

How we can avoid taking in fluoride:

It is possible to install filtration for the whole house, but much more pricey.

I get my water from water dispensers, that are found by supermarkets in my area. It is filtered tap water, but it uses a five step filtration system, that includes reverse osmosis. It is also more affordable, than bottled water.

Distilled and purified waters are also fluoride free, although the term purified may be used different ways. When I was buying gallon size purified water, I was able confirm on the company’s website that it was filtered by reverse osmosis.

Bottled waters may or may not contain fluoride, it depends on the brand. Same goes for spring water, which is also fluoride free, but some bottled water that is sold as spring water may just be treated tap water.

Reverse osmosis also removes minerals from the water. Tap water’s mineral content is minimal, there is much more to gain from consuming water that is free of chemicals, but it’s a reminder to keep an eye on our mineral intake.

There are many fluoride free toothpastes on the market, but it is also easy to make your own. Just mix coconut oil and baking soda 50/50.

First time I used it, I was surprised how clean my toothbrush was, which proved that this mixture also had a better detergent effect, than my regular toothpaste did.